She has a new online magazine called Souvenir.

Go here to pay or to see a free preview:
http://www.souvenirlifestyle.com

Okay, so who’s going to read it, besides me, immediately? Let’s get together later today + discusss, shall we?  TTYL!

When we bought our 20’s era brick bungalow in ’06,  one of our (G.O.’s) first projects was to gut and re-do the original kitchen.

The space to the left of our fridge originally had a pub table + 2 stools, which we NEVER, EVER used.  Something about our dining in front of the TV!?

SO, out with the old + in with the new vintage, red table — a giftage from my friend, Stacey, who knows of my love for all things vintage +/or red! 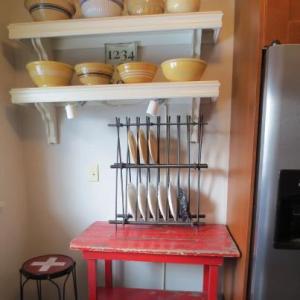 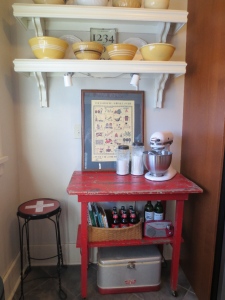 Plan B — out goes the plate rack + in goes the mixer! Much bettah!

Of course, the mixer looks great — as my stepdaughter, Marnie, said, the KitchenAid mixer’s job is to sit on the countertop + mock all the other appliances!  Ha! Fun!

Speaking of which, this poster (below) is from ’92; it survived the elimination of most of my ‘stuff’ from that era.

How could it not?  The artist — Catherine Grunewald — signed, dated + personalized it with my 2 boys! Years ago, she was profiled on Mary Emmerling’s show, Country Style, on HGTV.

Oh, + I sold those Hoosier canisters in my shop.  Love them!

My dad gave me that cooler (below), as he, too, is hip to my vintage + red ‘stuff’ love!  When not cooling beverages, it stores all my gardening magazines.  I’ve saved way too many magazines.

But I digress.  My friend, Linda Weathers, made the basket, which I love for its blue spongeware handles.

And yes, I did buy that radio because it’s red + looks old-fashioned!

How cool are the labels of these Woodchuck Ciders? Tell me I’m not the only one who buys something because it’s been packaged attractively! 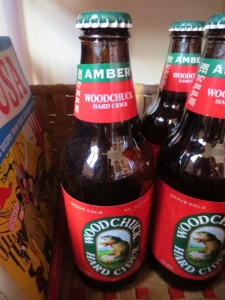 As I was doing yet another “move-around” in my kitchen the other day, I remembered a black plate rack that had been in my retail store. Sadly, it didn’t look right in my kitchen; I think the space was too small . . .

My black plate rack — just not ‘working’ in my kitchen.

. . . but it did remind me of another countertop plate rack that I’d seen in a long-ago Country Living magazine.  Somehow,  I miraculously remembered the name of the kitchen’s designer!  Nancy Fishelson.  Here’s her gorgeous Connecticut kitchen:

SO, Nancy Fishelson is a fan of the ‘move-around’, just like I am.  Here’s the plate rack in another room. 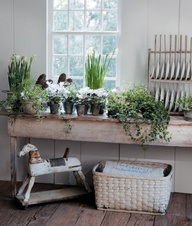 I love everything in this photo!

I’ve always longed for kitchen cabinets with a built-in plate rack.  So charming!

Cottage! Wish I was brave enough to do blue + white checks. Niagra Novice.


I am loving how these kitchen islands are rocking the plate rack.  Note to self: do this in next kitchen!

Since I was going down design memory lane, I also thought of Diane Keaton’s fantastic dining room in the movie Something’s Gotta Give.


The hanging plate rack seems to be the most eclectic of all . . . you can even rock the modern + industrial version!

Perfection when there’s no window above the sink!

I love the chest, the wood countertop + the industrial lamp. K.M.Y.

One of my favorite bloggers, Julia from Hooked On Houses, posted about this classic shingled house in the Hamptons.

My first thought was that it might be country style icon + author, Mary Emmerling’s, old house.

I’m a huge fan + have followed Mary’s career since this book was published. Who remembers her HGTV series, Country Style?

She was also the editor of the late, great Country Home magazine.

In ’02, my friend, Alan, + I went to her book signing (American Country Cottages) in Chicago.  She was very cool + laughed at all our jokes! 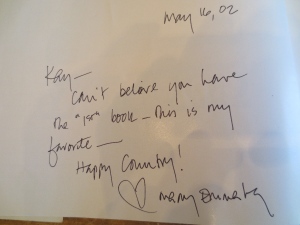 She was kind of wowed by my bringing her 1st book with me, + imagine her surprise when I showed her some magazine articles that I’d saved!

Anyway, here are some photos of Mary’s Hamptons house — the one I thought might have been in Hooked on Houses last week.

A version of this flag gate is in the American Folk Art Museum in NYC.

Okay, so now I realize the farmhouse in the Hooked on Houses blog is not Mary’s former home. I’ve never been to the Hamptons (soon!), but I know that there are 100’s of single-clad houses there!  See also: Ina Garten! 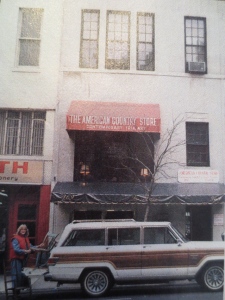 The American Country Store in NYC.

Last week, Julia from Hooked on Houses blog + I chatted a little about Mary; we wondered what she’s doing now.

I saw somewhere that Mary is a co-owner of a new retail store, but I can’t seem to find anything online.

Mary Emmerling’s Art of the Skull.

It’s fun to be me, especially when I visit my friend, Alan, in Chicago.

This past weekend we watched the Oscars at his house, + Monday a.m. he took me to the awesome Little Goat Diner.

This cool place (2012) is owned by Stephanie Izard, winner of the 4th season of Bravo’s Top Chef.

Her other, very popular restaurant, The Girl + The Goat (2010), is just across the street. Alan says there’s a 2-month wait for reservations!

Stephanie Izard’s goal for this restaurant was to create a true, East coast-style diner. The space is a feast for the eyes, design-wise — it’s a mix of retro, industrial + modern.

The bakery is in half the space…

…the diner in the other side.

This mug came home with me.

Can you see the penny tiles?

Industrial-style pendants at the bar.

All the above photos are from www.yelp.com. I took these next 3. Am I the only person who snaps pictures of restaurant bathrooms?


I suppose I should MENTION the food, no?  It was delicious!  Alan + I shared a reuben.  YUM!

And now, here’s how to find the Little Goat Diner!

The diner is in the West Loop neighborhood

I love all things vintage lighting, and I cannot lie. Cloth-covered wire rules! Edison bulbs make my heart race! We made our own version of this sweet  www.schoolhouseelectric.com (Portland, OR) lamp, using an old porcelain fixture from our basement. 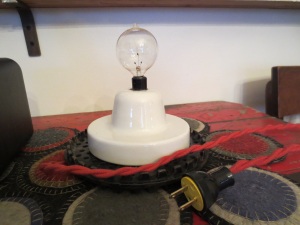 G.O. repurposed a vintage wooden surveyor’s tripod + made this cool floor lamp.  The lampshade is an older one from Pottery Barn.  It’s no longer available, but you could make your own easily.  Those pharmacy-style sconces were Pottery Barn, too, from an eBay seller.

But I digress. Back to the floor lamp. As awesome as it is, I know we (G.O.) could improve it.

Bye bye, brown cord! Hello, red cloth-covered cord from www.sundialwire.com!  And yes, this is why G.O. thinks I’m insane.  Meanwhile, I also need him to make me this awesome extension cord! Do you love it as much as I do? 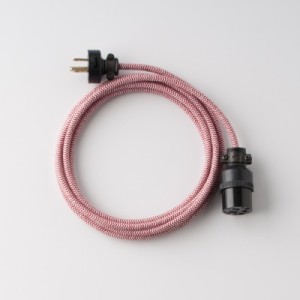 A past + future project.

He made us this awesome fan from the Sundial Wire website, but I sold it! Maybe I could persuade him to make us another! Stay tuned.